in support of love and justice for people and other species in the systems we co-create. 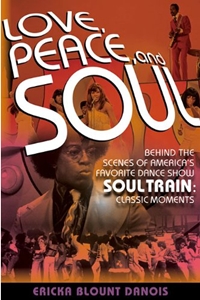 This interview by Farai Chideya of Ericka Blount Danois reminded me of an experience I had this weekend watching (for the zillionth time?) In the Heat of the Night. The dvd I bought had some awesome bonus material that included a critical discussion of movie-making and Hollywood in the sixties as it impacted the actors, score composer (Quincy Jones) and production of this film. I realized how much I enjoy deeper/expanded discussions of the social order in which my favorite movies were made. Farai Chideya makes this point about Danois' book, Love, Peace and Soul -- which makes me think I'd like to read the book:

In her new book, Love, Peace and Soul: Behind the Scenes of America's Favorite Dance Show, Soul Train, author Ericka Blount Danois does more than a pop-chronology or even a look behind the scenes. She gets deeply into the history and sociology of a man and a media movement that reshaped how America looked at race, self-expression, and culture.

I got a chance to ask author Ericka Blount Danois how and why she so deeply explored Soul Train and Cornelius' life.

Great article on the neuroscience of racism -- a subject that I think needs to enter the conversation on race. The author is a co-editor of Are We Born Racist?: New Insights from Neuroscience and Positive Psychology. Here's an excerpt from the article:

The research is overwhelmingly clear: job one is to confront the fact that racial difference exists. The new science of racism reveals that our brains do indeed seem to react negatively to people of different races — exposure of just milliseconds to a black face can cause white folks’ amygdalae to light up with fear.

Colorblindness doesn’t work because we never stop spotting differences in our environment.  Our brains are designed to do that; that’s how we survived on the savannah 50,000 years ago, and it’s how we survive in the globalized urban jungles of the 21st century.

Read the whole article at www.alternet.org

Hinojosa tracks the enforcement sweep from the neighborhoods of Illinois to the expansive Willacy Detention Center in south Texas. Immigration detention has become both a vital tool and a lightning rod for the administration’s immigration strategy.

Using a network of 250 detention facilities across the country, ICE is able to ensure that undocumented immigrants will not slip back into the population in a game of “catch and release,” says Mark Krikorian, executive director of the Center for Immigration Studies. “That’s unacceptable if you’re going to have an immigration system that is taken seriously—seriously by the public or seriously by the illegal immigrants themselves.”

During a yearlong investigation, FRONTLINE uncovered a troubling picture of abuse inside immigration detention facilities, including more than a dozen allegations of sexual abuse at Willacy, as well as alleged cases of beatings, racism and management cover-ups. Dr. Twana Cooks-Allen, former mental health coordinator at Willacy, told Hinojosa that the detainees she saw inside were not the border-crossers who she expected. “They were people who had been established, who had children here, who had businesses, who had attended school.”