« A northern cardinal family in the holler | Main | Holler coyotes »

A Tennessee warbler visits the holler

On May 11th this year, Merlin identified one of the birds singing near my house as a Tennessee warbler. I tried to locate it but, as often happens by that time of the year in the holler's woods, I couldn't see the bird for the leaves. Even though it's named for the state I live in, these warblers don't spend much time in Tennessee, so I felt fortunate to at least have caught one's song, my first ever.

Yesterday, I watched a couple of American goldfinches hunting for bugs on a giant ragweed plant not too far from my birding window. When they flew off, another bird landed on the plant. At first I thought it was another goldfinch but the size, color and feather patterns didn't quite fit. With field glasses I clearly saw a thin, pointy bill and obvious lack of white on this bird's wings. I quickly traded the binoculars for a camera and managed to get several photos as the bird moved up and down the plant, gleaning the stems and flowers. 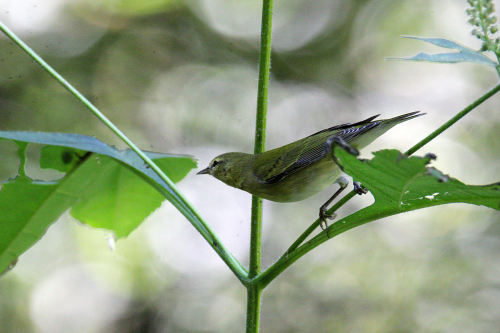 Since I couldn't immediately identify the species, the photos gave me a chance to gather more field marks and narrow the choices. Before long, I'd settled on Tennessee warbler as the closest match, and then used Birds of the World, Merlin and other online resources to sort through similar species with all of their seasonal variations. I concluded that it was, indeed, my first visual experience of a Tennessee warbler in action. 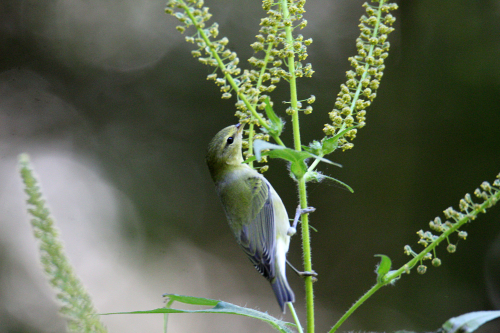 Once I had an identification, and just for the heck of it, I decided to check out the BirdCast site to see who'd been flying over the holler that past evening. The estimate for Campbell County, Tennessee was 1,240,400. Though Tennessee warblers did not show up in the species list, it gave me goosebumps to think about that many winged beings flying by while I was sleeping.