Louisiana Waterthrush in the holler

A little more than a year ago I saw my first Louisiana waterthrush. It was grooming its feathers on a branch, easily identifiable with binoculars and almost beyond reach of the camera lens I was using at the time. I felt lucky to get any kind of usable image. 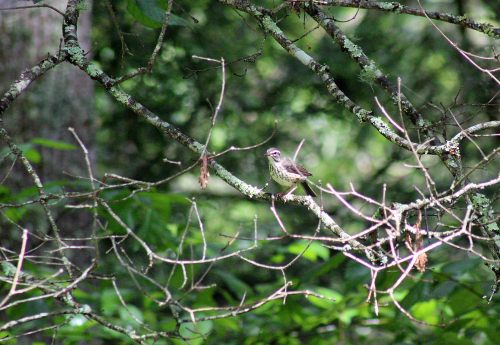 After my first sighting, I looked this species up at Birds of the World -- something I like to do for any bird I find in the holler -- to predict what my chances of seeing more of them might be.

Pretty much centered in the breeding range for Louisiana waterthrushes, the holler's natural features match a majority of those where these birds more frequently breed. It's hilly with closed-canopy mixed deciduous and evergreen forest, and has two high to medium gradient headwater streams running through it. Neither stream could be classified "perennial" but, in most years I've lived here, they'd have had plenty of water flowing during the waterthrush's peak breeding season. Not an exact match, but I thought I had a good chance of seeing them again. 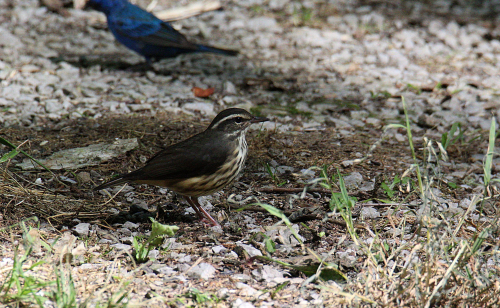 Just a few days ago, I caught sight of one searching at the edge of the woods beyond my driveway and hanging around my planter garden, hunting and catching insects. 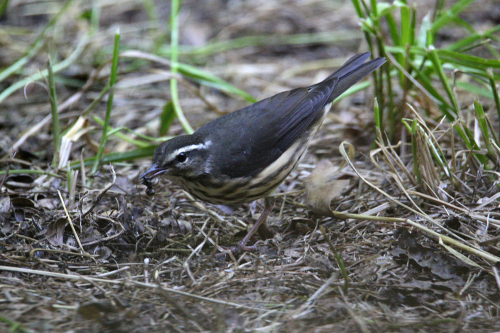 Prior to this sighting, my Merlin app had suggested one might be around but I was unable to match my recording to any of the typical songs/calls. I've now seen and heard its calls every day since I saw it on June 28th. It's interesting to me that its appearance near the house coincided with a stretch of really dry weather during which the flow of both streams had slowed considerably, so I'm wondering if that's why it came in closer or if it was just branching out a bit. 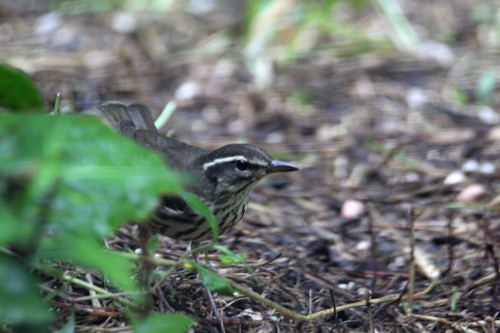 Good photos of this individual have been hard to get. It seemed shy at first and would scurry for cover if it saw me at my bird-watch window. Now that it's coming closer, my imaging difficulties relate more to its speedy foraging style -- lots of blurry pictures to weed out.

Such an interesting bird. Makes me happy to hear and see it around the holler.