« Out in the holler: sweet bubbies and sweet babies | Main | Old and new butterfly friends, ebony jewelwing, new plants and another toad »

Sights and sounds in the holler this week: toads, et. al. 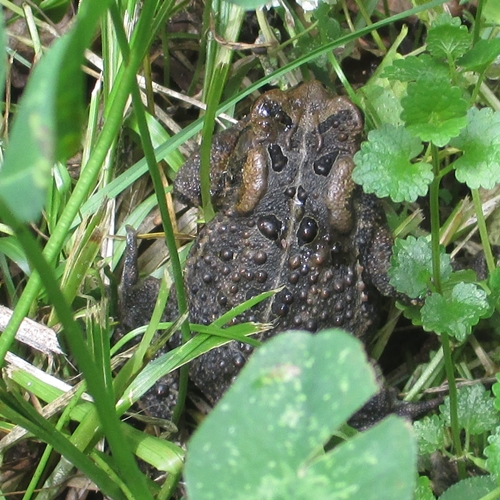 I've been listening in to the holler for 18 years, now, and there are a few sounds I can't identify even though I've heard them many times. This past week, however, I heard some new ones. I also happened to see some toads and, in trying to verify their identity, got a clue to the "waaaaa!" being sung just beyond my planters, near the edge of the woods.

I believe all of the sightings have been of American toads. I managed to get the photo above on the occasion of the third sighting. Based on the presence of a space (albeit small on this individual) between the cranial crest and the parotoid glands, I decided they were all Anaxyrus americanus.

The toad call I was hearing, however, was closer to that of Anaxyrus fowleri -- Fowler's toad -- another species I've seen around my planters. Fowler's toads typically make shorter, raspier calls (1-4 seconds) compared to the longer, clearer call of American toads (4-20 seconds). It's also possible that I was hearing both, especially before I heard recordings of each one. I was hearing these calls several times a day over a 5 to 6 day period.

Whoever they are, I'm glad they're around, and I'll welcome as many more as want to be here.

The other froggie sound to erupt in the holler this week was that of Lithobates catesbeianus, the American bullfrog. No questions about that one! Very early this morning I heard overlapping bullfrog calls at the upper pond in my Nature's Notebook observation area.

One more amphibian note: I saw my first Southern red-backed salamander -- maybe two weeks ago, by now. Seeing such an amazing variety of creatures makes my efforts to maintain a planter garden worthwhile. 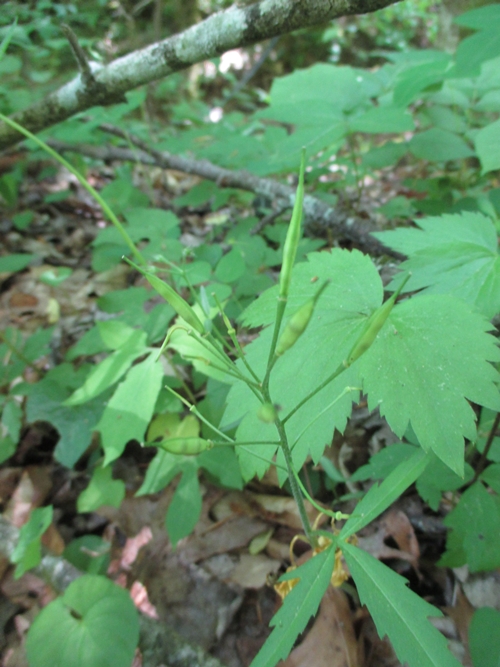 Ripe fruit of a cutleaf toothwort (Dentaria laciniata) on May 14, 2018 [Photo: Cathie Bird]

Cutleaf toothwort-1 reached the ripe fruit phenophase around the 10th of May. In the photo above, this plant still has some fruits, but some of the pods have opened and dropped seeds. This is the first time I've gotten a photo of ripe fruits for this species.

The oxeye daisies have flowered in the past week or so, replacing the lyre-leaved sage and fleabanes around my yard that are well into their ripe fruit and seed drop phases: 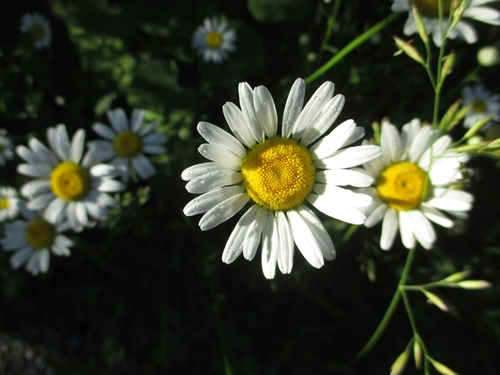 I noticed this morning that a few orange day lilies have flowered. On trips to town this week I saw quite a few evening primroses and Indian pinks.

In terms of what's flying in the holler, I caught up with one of the crescent butterflies that have been around for awhile. The one below is likely a pearl crescent, but I took the photo so I could study it, because the color seemed a little different. I haven't decided for sure if this is a pearl or northern crescent -- I didn't get a wings-folded image, which would have helped differentiate them. Other butterflies I've seen since my last post include red-spotted purples, spicebush and zebra swallowtails, and a great-spangled fritillary that I've seen almost every day since May 10th around my new planter arrangements. 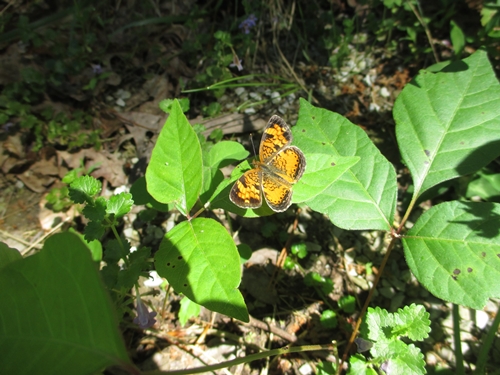 Whitetail dragonflies are among the damsels and dragons populating the holler now. Almost everyday last week, I observed a male and female whitetail hunting around my planters, in addition to several others congregating in a wet area farther down my lane. I think I saw one of the large petal-tail species yesterday and, a few days ago, a large greenish dragonfly that I could not identify.

Returning birds' songs over the past week or so include the wood thrush and common yellow-throated warbler. I got my annual planter flowers installed just in time to welcome a pair of ruby-throated hummingbirds that I hope will nest again in the lespedeza and orange jewelweed tangles in the Hudson Branch floodplain.

Coming back from town last Friday, I came upon a wild turkey trotting up the lane ahead of me. I haven't seen one that close to the house in awhile. One of my neighbors said he saw a hen and 8-9 chicks heading into the tall grass of one of their fields just a few hours before I saw the single turkey further up the holler.

It's still a very busy time of year up here as we transition from spring into early summer.

Posted by Cathie Bird on 27 May 2018 at 05:12 PM in Amphibians, Butterflies and Moths, Cumberland Mountains, Phenology, Tennessee, Wildflowers | Permalink