Exchanges with other species

Sooner or later I turn a psychoanalytic eye toward just about everything, if only for a moment. I've been doing this since high school, though I didn't know that's what I was doing until much later. On my about page, I list exploration of human relationships with other species and our shared environments as a major area of of interest in the larger psychoanalytic field.

I have intended to write a lot more about this here, but it just hasn't happened. Yet. A recent experience, however, gave me a little shove that might put some fire under my intention.

A few weeks ago, one of the crescent butterfly species came to my window sill and stayed there for 2-3 hours. He -- I'm pretty sure it was a male -- allowed me to get a number of photos, to get right up in his face (literally) for a closer look, trying to figure out if he was a pearl or northern crescent, or silvery checkerspot. I consulted my butterfly book and searched lots of images online at BugGuide and elsewhere. After all that, I still was not clear about his identity, i.e., how he is named according to human scientists. 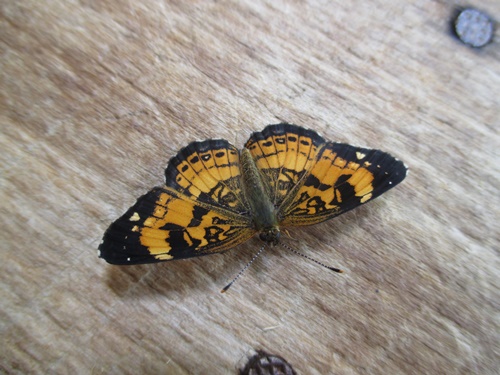 So, I asked him which one he was. I showed him pictures in my butterfly guide of each of these species. I told him that people science was concerned about such things as names, but that, deep down, I knew he was just who he was right there in the moment on my window sill. During this encounter he moved closer to me, millimeter by millimeter, and changed positions of his wings when I would change my position in relation to him.

At one point I went out to the kitchen to reload my iced tea glass. He was still on the sill when I got back. When I was ready to leave the room for the day, I told him I'd leave the window up and that he could sit there as long as he wanted to. Just before I left the room, I turned back to say goodbye. He was already gone.

The following day, I happened to see a link, posted on Facebook by a colleague, Renee Lertzman, to an interview of James Nestor, who (along with others) established the Cetacean Echolocation Translation Initiative (CETI), an independent research project seeking to study and comprehend the meaning of sperm whale clicks. Here's the quote from the interview that grabbed my attention:

By interacting with these animals face to face, which is what we’re going to be doing, you can really spur them to interact in a way that no hydrophone or person on a boat is going to be able to do. We have video showing that something magical happens when you approach them in peace face-to-face. They want to sit there and interact with you. It’s those interactions that we think are going to provide the best data.

Having had many interspecies encounters like that with the butterfly, this notion was not new to me. I have long believed that learning to communicate more directly with other species is not only possible but very necessary. Especially now, when Earth's living systems are so clearly in trouble, the human species needs to engage in vigorous exploration of our ambivalent relationship to the Earth, to revive the deep connections to nature that our heads may have lost but our hearts remember.

I have written quite a few posts about these connections, but they are scattered across several different blogs. I did that on purpose.

Back in February, to celebrate 10 years of data collection for Nature's Notebook, I wrote Seeing Forests, Seeing Trees, which I posted at my HollerPhenology blog. In that post I began to articulate the dynamics and world views that led me to corral my narratives in separate spaces rather than letting them all run free on one blog:

I grew up in the grip of scientific materialism. My undergraduate training as a naturalist in the late sixties/early seventies was rooted there as well, though I can look back and see shifts toward thinking about the world in terms of whole, integrated systems rather than a collection of independent, disconnected parts. This shift even led me to change career goals and pursue a graduate degree in contemplative psychotherapy, as well as certification as a psychoanalytic psychotherapist.

For many years I felt a kind of tension growing -- between seeing forests and seeing trees -- often feeling that I was, at heart, more of a forest person. The feeling of energetic oppositions came alive especially when I remembered the tree person of my childhood exploring the life and landscapes of the Flint Hills and the Rocky Mountains.

I see myself now with at least a toe-hold in an integral world view, appreciating multiple points of view, and enjoying the heck out of migrations between wild, non-local exploration of mind and spirit, and the feet-on-the-ground-dodging-poison-ivy collection of phenology observations.

I really did enjoy writing that post, but hitting the publish button to send it into a space previously reserved more for observations of individuals -- rather than feelings about the forest, the relationships in which we all lived -- magnified the tension to a level that the psychoanalyst in me had to get curious about.

My experience with the butterfly and the synchronous encounter with the CETI project appear to have dissolved some resistance to writing more on these ideas. And I'm noting that it is In Hawk Space that I have decided to gather such a series.

Lots more to come, I hope.

Marion Woodman was one of several Jungian analysts whose work was extremely important to me as I moved through some difficult transitions in my 30s and 40s, thus, I was sad to learn that on July 9, 2018, she transitioned out of Earth space.

From a statement by the Board of the Marion Woodman Foundation:

During this last week, as Marion passed from one world to another, she was accompanied by the love, prayers, poems, tears and laughter of this worldwide community – all of whom have been so touched, so moved, so changed by her energy and vision and love.

There is an energy that is working its way through this community — a feminine energy with a strong masculine partner – and this energy is determined to carry forward Marion’s work — to change the world. And for the love and encouragement Marion gave each of us we all send our deepest, most loving gratitude.

Obituary in the Toronto Star

Obituary in The New York Times

Until August 12, 2018, you can download a conversation between Marion Woodman and Robert Bly on their book, The Maiden King, at no charge.